The Teen Vaping Trend – What Parents Need to Know

With the recent Monitoring the Future Study release indicating that nearly one in three 12th graders reported using a vaping device in the past year, it’s imperative that parents are informed of the potential dangers that can result from vaping.

Vaping is the act of inhaling and exhaling the aerosol, often referred to as vapor, produced by an e-cigarette or similar device. It’s become more popular among teens than regular cigarettes, especially given that vaping devices can be used for anything from flavors like mango, mint or tutti frutti, to flavorings containing nicotine or THC, the chemical compound in marijuana that produces the high.

What are the Risks?

There are several risks to vaping for teens. Below are three major ones for parents to be concerned about:

Vaping is often marketed to kids, downplaying the dangers.

With lots of flavors available for vaping liquids, as well as the variety of colors and devices available that charge just like cell phones, it’s clear that vaping products are often marketed to teens. One of the slang terms for vaping, known as JUULing (“jeweling”), comes from the JUUL brand device that looks more like a flash drive as opposed to an e-cigarette. Vaping is also often sold as a “safer” alternative to cigarettes, and some teens are under the false assumption that because e-cigarettes don’t contain tobacco they’re safe.

Vaping chemicals used in the liquids can be more concentrated and dangerous.

Inhaling from a vape pen or e-cigarette, especially in the case of one containing nicotine or THC, can enhance a drug user’s high and can amplify a drug’s side effects. Vaping is also very new and there are literally hundreds of brands, so there’s not a lot of firm information about what chemicals might be in what vape liquids. But even beyond nicotine and THC, synthetic chemicals that make up these liquids – including “herbal incense” like spice and synthetic marijuana – expose the lungs to a variety of chemicals, which could include carcinogens and toxic metal nanoparticles from the device itself. Not only could these chemicals make their way into young lungs, causing irritation and potentially “smoker’s cough,” but they could also damage the inside of the mouth and create sores.

Vaping may make the transition to cigarette smoking easier in adolescence.

In a meta analysis of six studies, the findings concluded that the risk of smoking increases four times if a teen vapes versus a teen that does not. In another study of more than 2,000 10th graders, researchers found that one in five teens who reported a regular vaping habit at the start of the study smoked traditional cigarettes at least three times a month by the end of the study period. Another 12% of routine vapers smoked at least one day a month. By comparison, less than 1% of students who didn’t try vaping reported smoking even one day a month at the end of the study.

What Can Parents Do?

Make it clear to your son or daughter that you don’t approve of them vaping or using e-cigarettes, no matter what.

If you think your son or daughter is vaping, take a deep breath and set yourself up for success by creating a safe, open and comfortable space to start talking with your son or daughter. As angry or frustrated as you feel, keep reminding yourself to speak and listen from a place of love, support and concern. Explain to them that young people who use THC or nicotine products in any form, including e-cigarettes or vaporizers, are uniquely at risk for long-lasting effects. Because these substances affect the development of the brain’s reward system, continued use can lead to addiction (the likelihood of addiction increases considerably for those who start young), as well as other health problems.

You want your child to be as healthy as possible. Find out why vaping might be attractive to your son or daughter, and work with him or her to replace it with a healthier behavior. 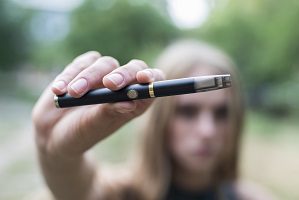 Drug Take Back Boxes in Dothan

The Unique Risks of Teen Substance Use